How many times have you checked in your code, a couple hours later you get a call from someone at the office saying the code doesn't compile on their machine because there is a file missing from source control that is added to the solution? I know before we started putting every project (no mater how big or small) in a CI build this happened often to teams I worked with. Part of the reason we didn't setup CI builds was because it was this scary thing that developers didn't need to know anything about, that was someone else's job right.

This post will show you just how easy setting up CI with Visual Studio Team Services (VSTS) and Team Foundation Server (TFS) really is.

Before getting started it's worth noting the sample project we are using here  C# MVC web application.

Open up a TFS, browse to a Team Project and then click on the 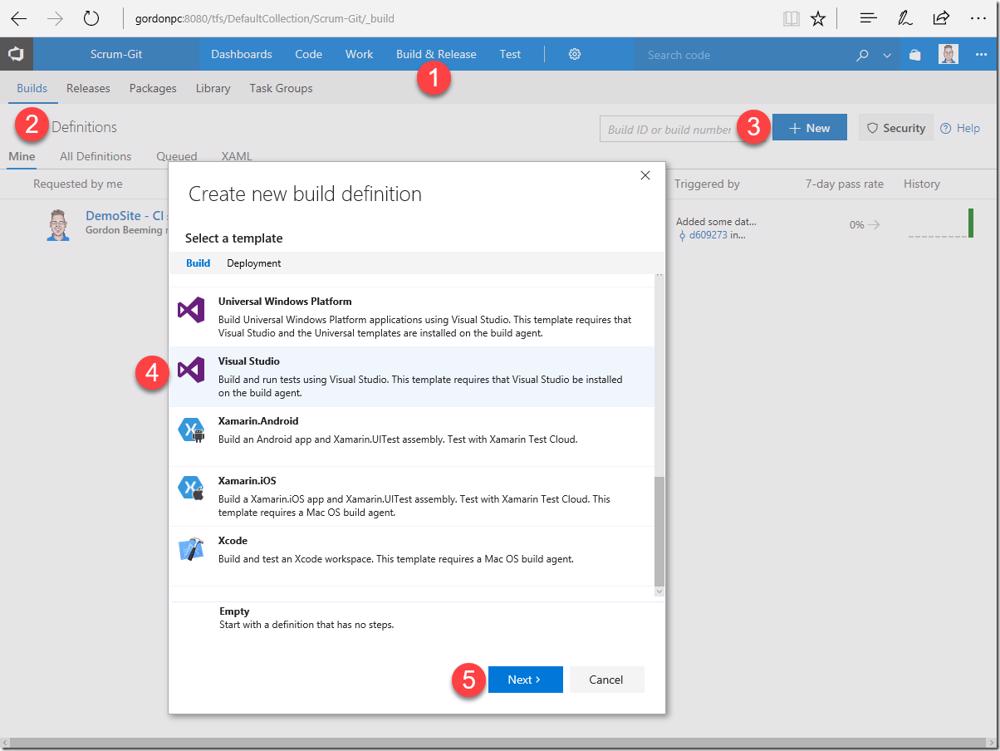 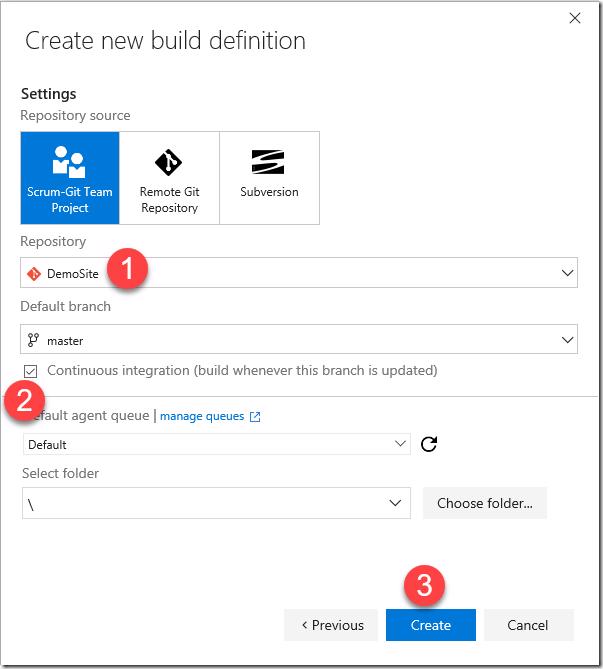 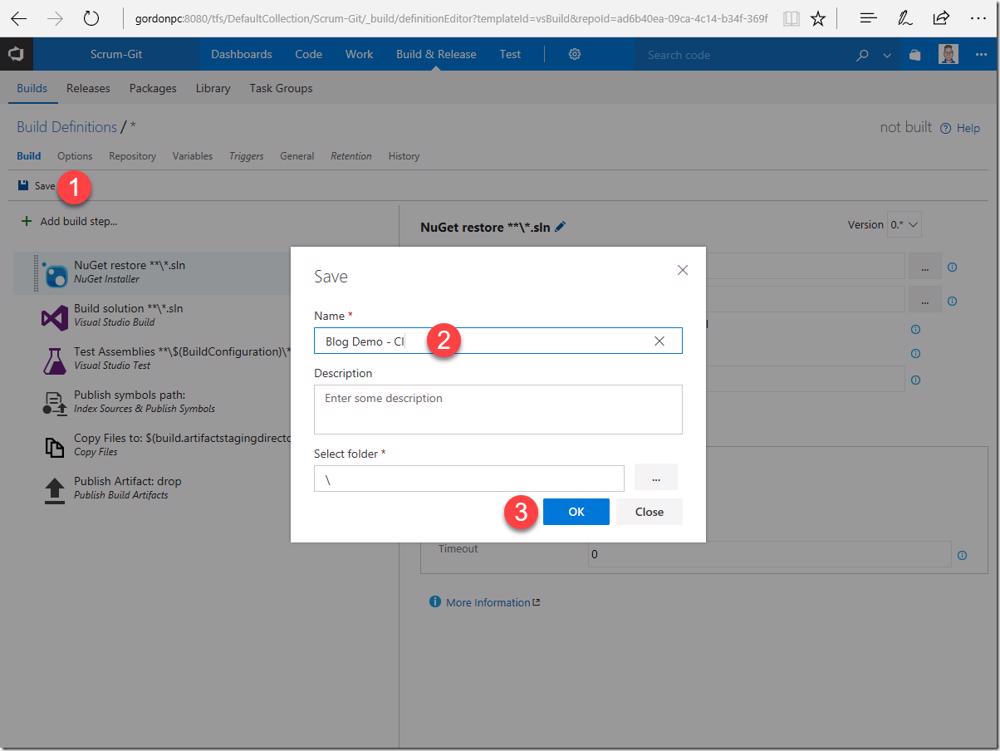 You have now created a successfully continuous integration build. Click the Queue new build button, click OK and watch all this hard work pay off 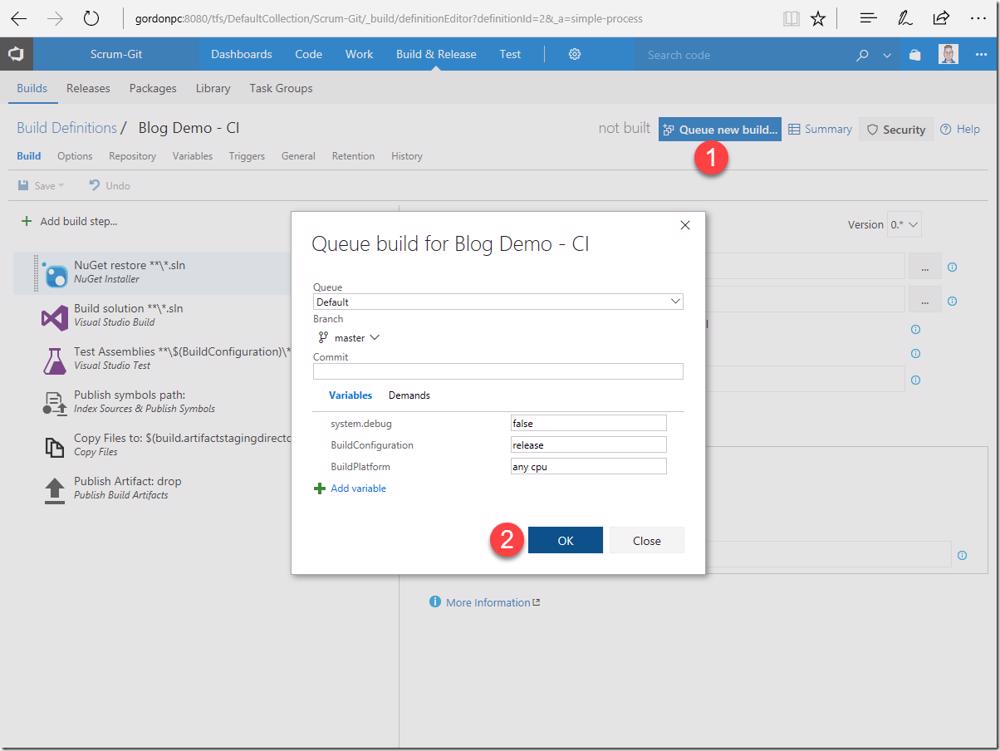 Now that wasn't that hard was it? In a small while depending on the size of your project you should see your project has successfully built 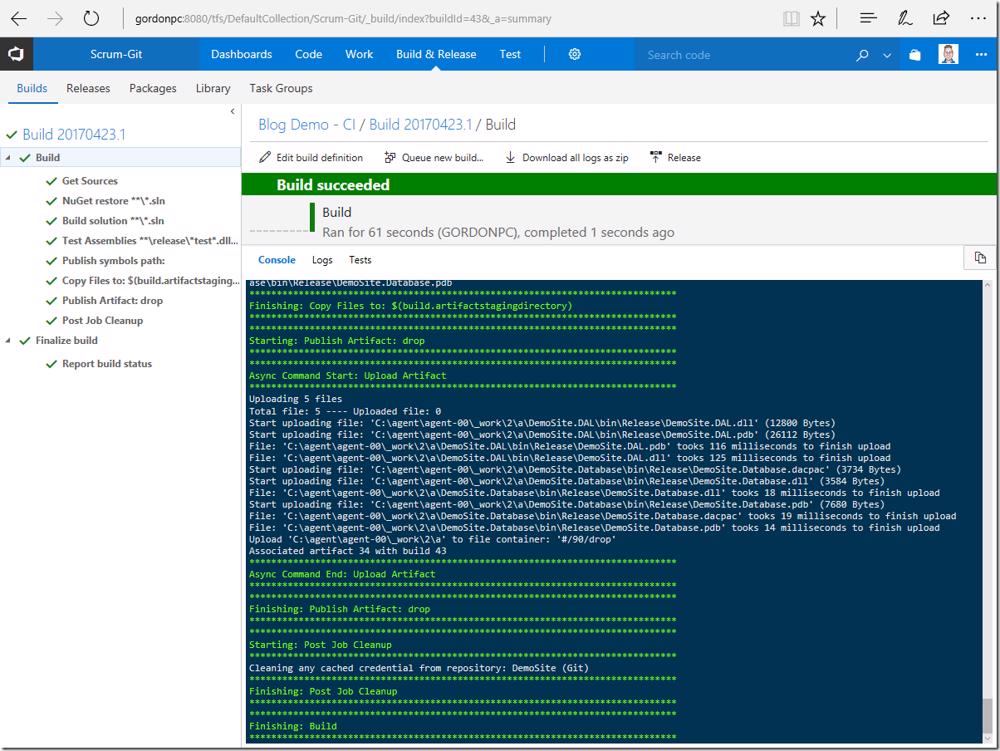 Adding a bit of extra value to your CI

The extra value we are going to add is

Start off by editing the build definition

Developers often use pragma's to do different things in debug and release builds so we want to make sure we are testing both configurations. We'll start by 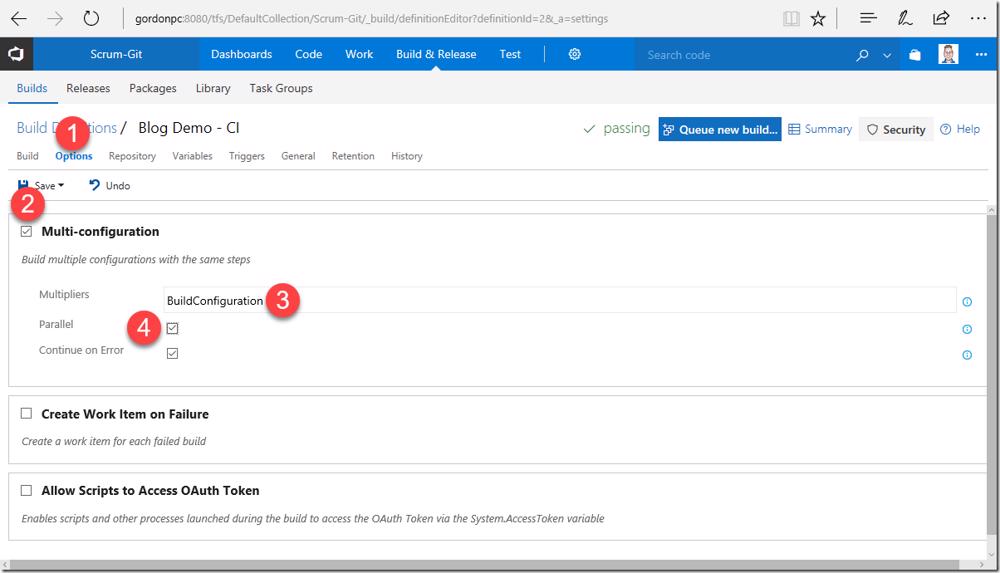 So what we've done now is told the build system that we want 2 builds to run each time this build is triggered, once for the debug configuration and once for release and we want to run the builds in Parallel to take less time. Let's try our changes out 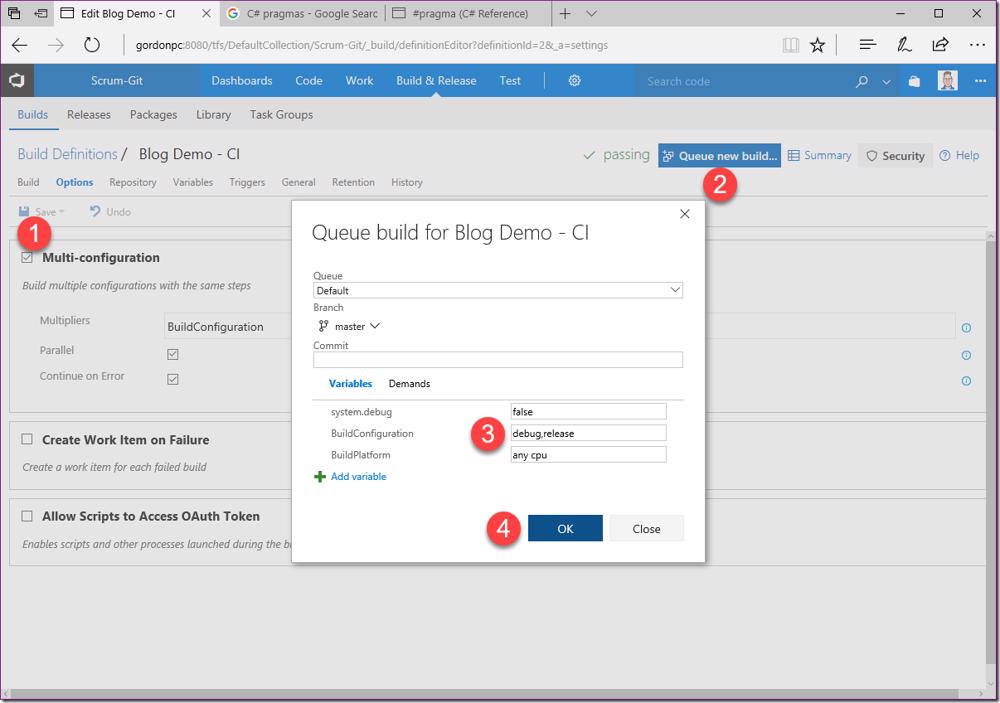 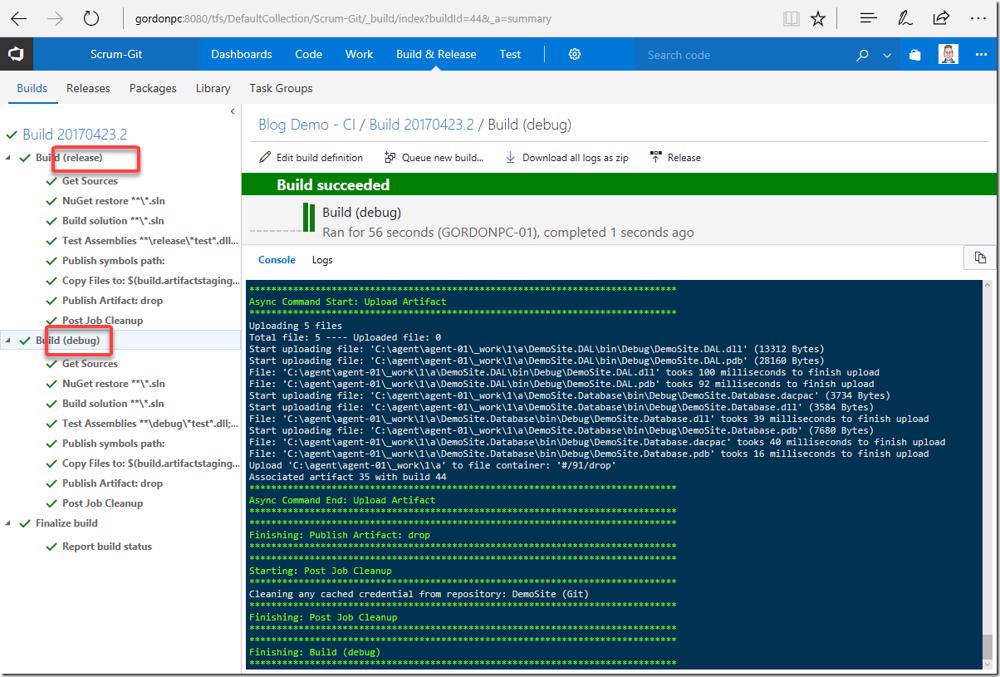 That's all to get both configurations to run

Create a bug on failed builds

I like creating bugs when builds break but not just so there is bugs, I like adding tags to see which branches we are breaking the most. You would generally ask different questions when you see different branches show up, for example you never want to see things breaking for the master branch because code should be working 100% by the time it's merged into master.

Again we are going to edit the build definition and head over to the Options tab like with the previous section. This time around

What this is going to do is when the build fails create a new Bug, assign it to the person who manually kicked off the build or whoever checked in the code to make the build fail setting the title and tags for us.

Click Save as we did earlier and lets test the change. Because this is a CI Build lets find the code we are building and go make some changes to that code

So in a Todo controller that I have, I decide that when we running in DEBUG configuration I don't want to place the code in a Try catch so that we can see the exceptions that occur instead. Notice how this method expects a return string which we forgot to put in 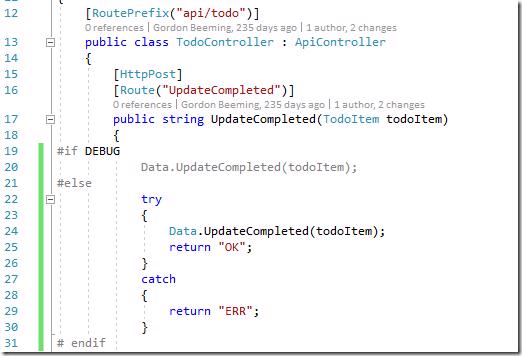 Being a 'bad developer' I'll just go and check this in without testing it. 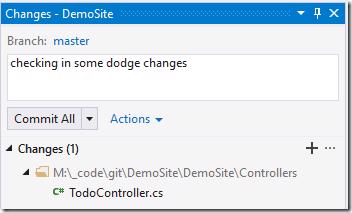 Now we should get an email from TFS telling us we have a new bug assigned to us, opening that up we can see 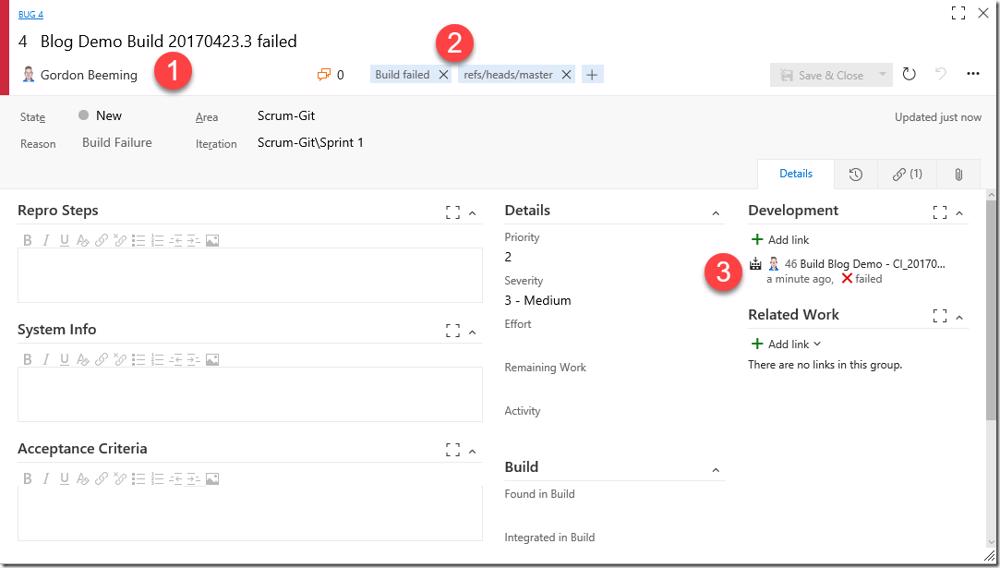 If we open up the build we can see that the release build went through 100% and only the debug build broke. If we weren't building all our configurations we would not have noticed this 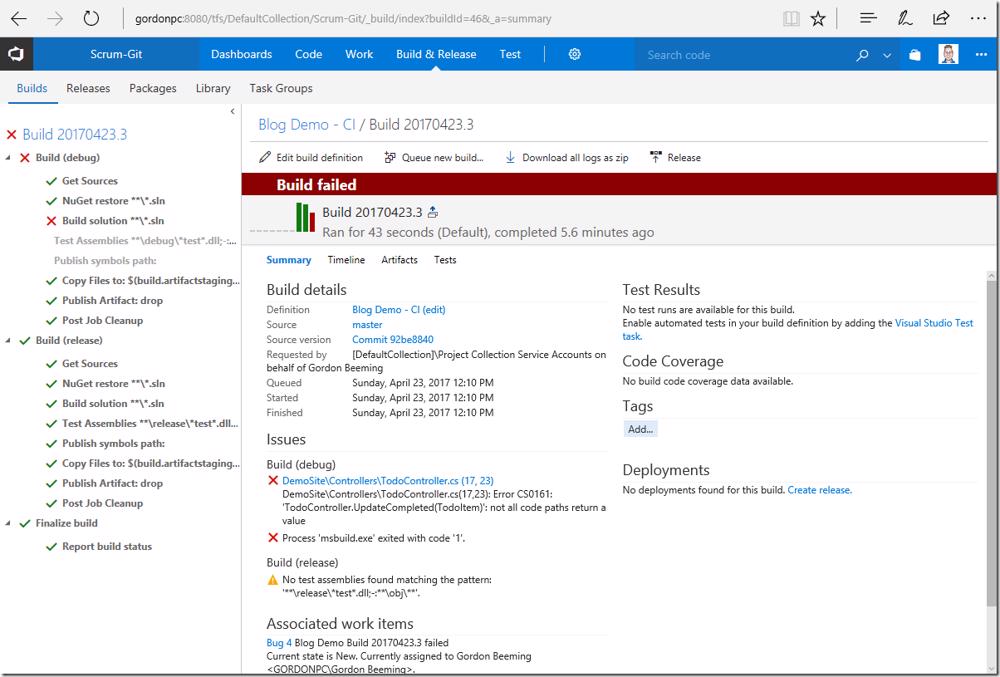 . I'm also going to fix that bug for the rest of the post.

This step you could argue has less value although I have had it with a couple of builds where artifacts left behind from a previous build cause us to see strange things, especially with a post coming up soon where I'll highlight this

Again let's edit the build definition, this time we are going to

Click Save to keep these changes. You do have to realize that you are sacrificing build time/speed for accuracy here, on bigger builds you may want to be more specific about what you clean up.

Trigger on all branch check ins

Earlier we added an option to tag which branch breaks our builds and currently we are only triggering our build off the master branch which is slightly not helpful. Let's do the following now 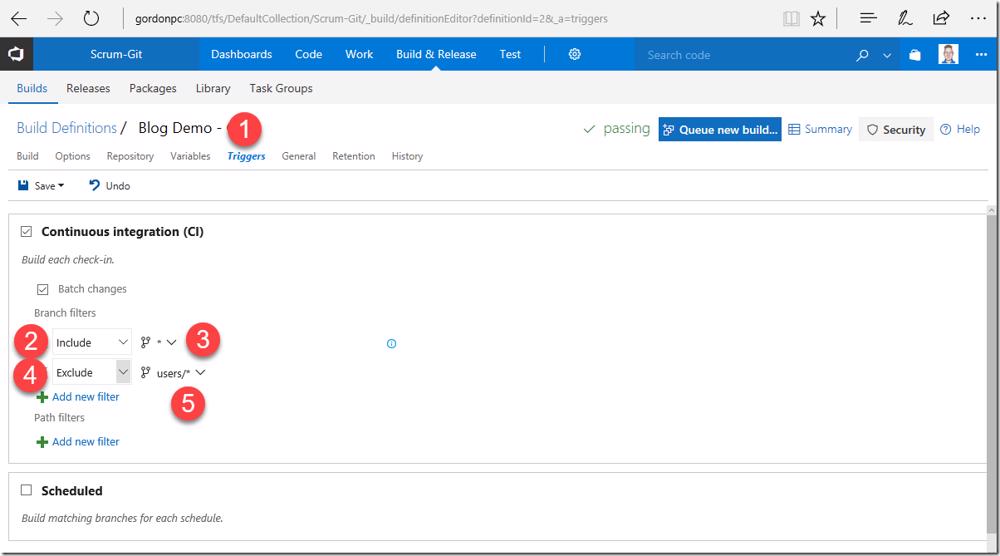 Click Save. What we have done now is say that we want to trigger off any branch that a check-in takes place for although if there is a users branch we'll ignore those because we understand that guys do commit builds into branches tagged with their own name that could have bugs as that prototype things 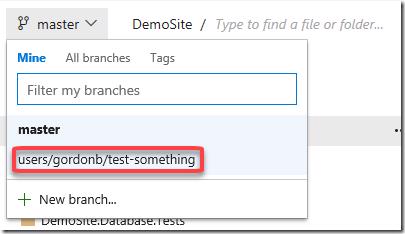 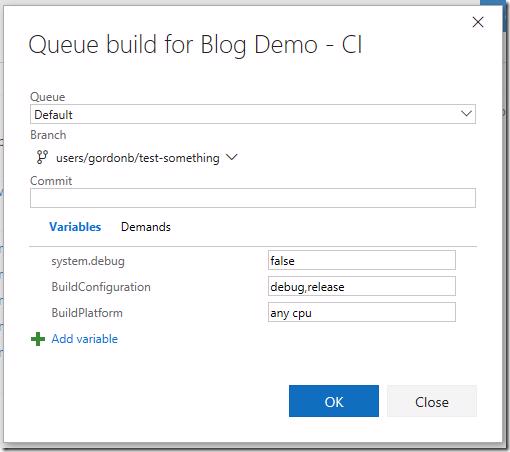 It will build as normal (including creating bugs when the build breaks). 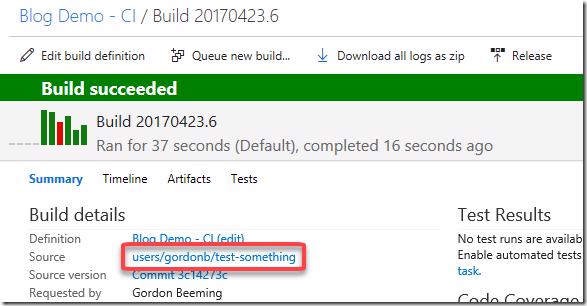 We all done. Builds will now trigger for any branch except those under a users path.

Another thing I really like doing, especially in this days fast paces world of releasing multiple times a day is use the build number formats in TFS to extend the scope of traceability into the compiled assemblies. Edit our build definition and 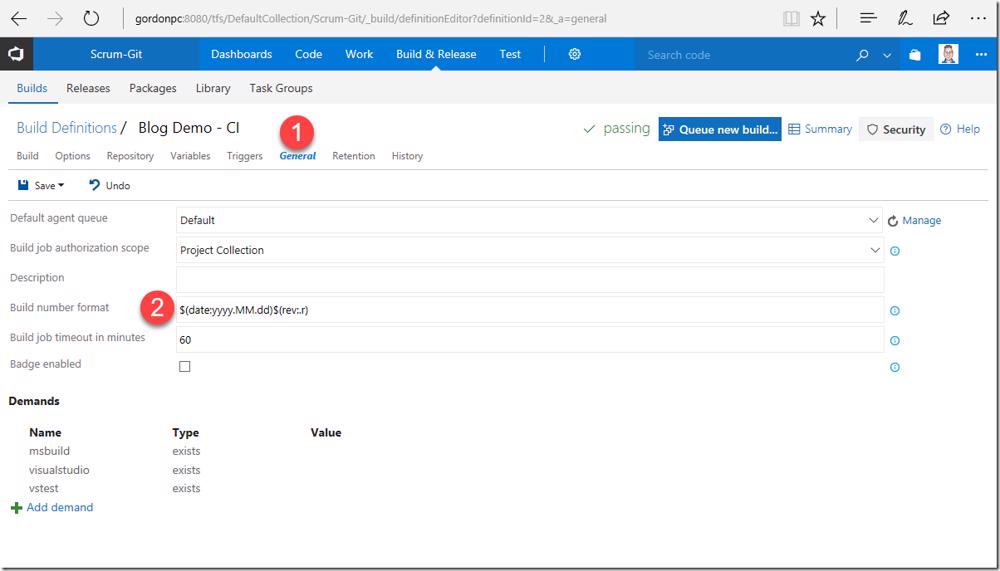 Click Save. This alone doesn't do much for us but gives us a build number that can be used for a assembly version number.

After that is installed go back to your build definition and edit it again. Add a new task Update AssemblyInfo

and place it as the first step in your build 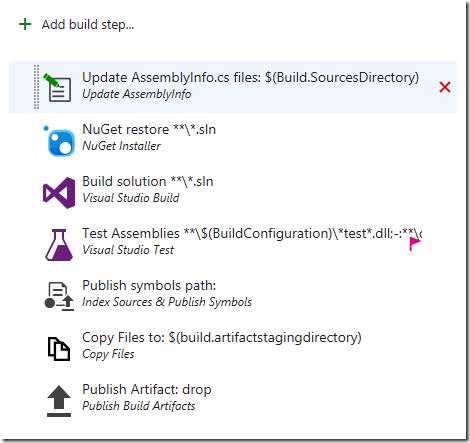 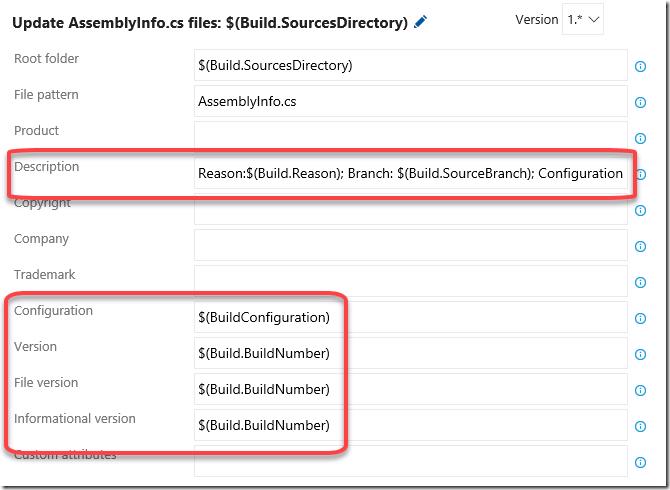 Now if you kick off a build you'll see this information get stamped into your binary. 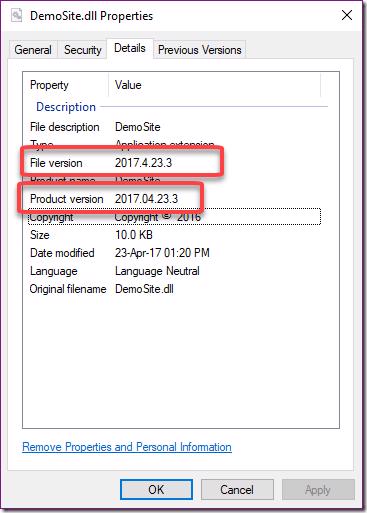 This code relies on you mapping MVC attribute routes

running this from a our local build would show Dev Build?

In my example here the deploy was just pulling the binary out of TFS of build and dropping it onto my dev machine to get the compiled info but as you can see we can trace this back to a specific branch, commit and build in TFS now. After we get the Build.Reason in TFS we will know some extra info like who kicked off the build (below screenshot from the build variables docs) 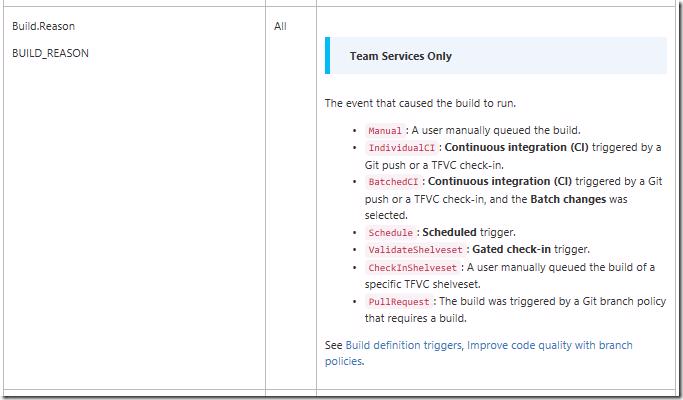 The last thing I usually do is label sources. For this edit the build definition and 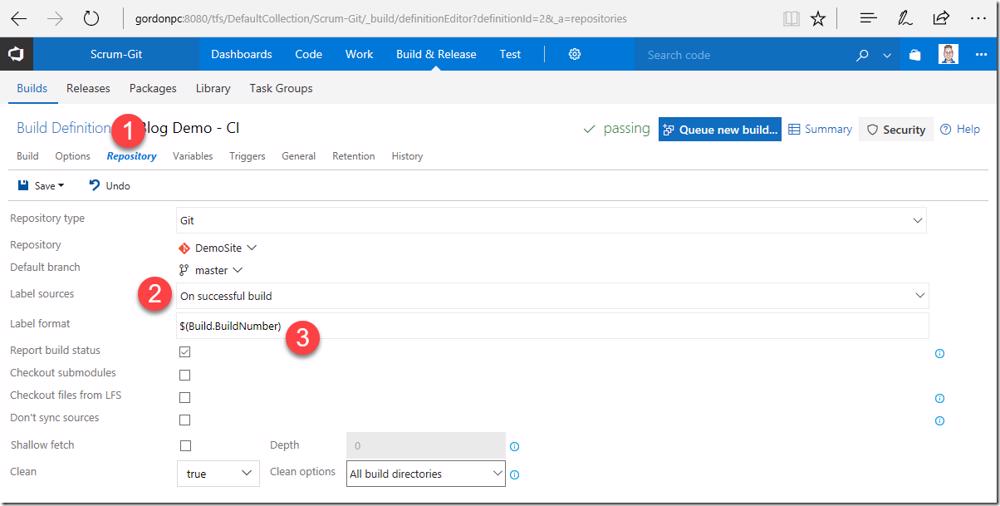 This will now generate a lot of labels as you could expect so I normally adjust the Retention policy to remove this. 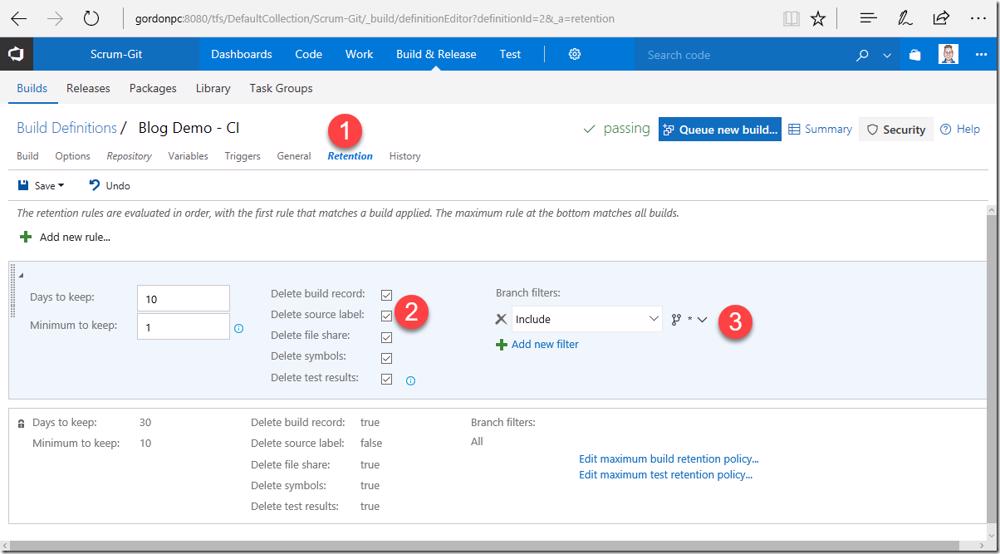 This works quite well if you are using Release Manager in TFS/VSTS as well as the policy on the releases is usually set to keep the builds around that are being used so you will always have the tags  if needed for any builds actually used in your release process.

Click Save and run your build, after it's successfully run go to the code tab and you should see your new tag added

Tagging can be really useful for a couple of reasons like debugging production issues as you can check the code as of that exact build.