. Today I finally managed to get around to that and added some visualizers for TFS Work Items.

3 new visualizers were added 2 debugger display visualizers and 1 debugger visualizer. The first is for Microsoft.TeamFoundation.WorkItemTracking.Client.WorkItemType and just displays the Name of the Work Item Type

The next  one added was for Microsoft.TeamFoundation.WorkItemTracking.Client.WorkItem and that displays the Status, Id and Title of a work item which is awesome for viewing the results of a query during debugging

Now having the above is very useful but drilling down into fields was a nightmare so I decided to create a nice visualizer for Work Item which would show you the work item on a form as it would be inside Visual Studio. You simple click the little arrow next to the value and then click on View Work Item 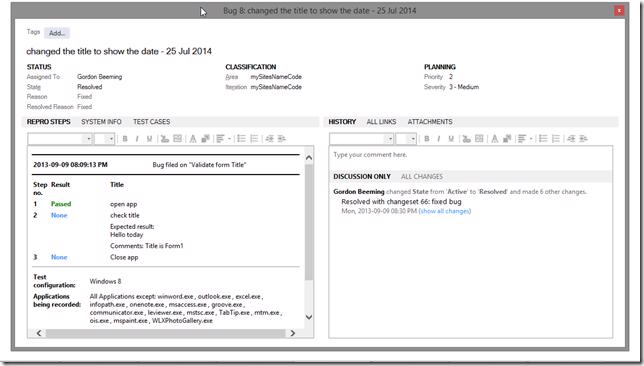 , in the case above I altered the title just before I opened the visualizer and it kept it's new value as expected

I have tested this on both On Premise TFS and Online with VSO. The On Premise version did give an issue about COM which I'm hoping is just an issue on my machine/instance but will investigate anyway