I use to make a lot of TFS customizations and had to apply the template changes to multiple team projects which took a bit of time. Depending on the method you use it could be a quick or loooong process 🙂. When I first started doing customizations I used the TFS Power Tools to upload changes which is a lot of effort because you are uploading one work item definition at a time into one team project.

After a while I started using command line (witadmin importwitd), this was slightly faster but I found myself keeping a list commands in a txt file and then searching for the one I need when needed and run it.

I follow Martin Hinshelwood on various social media and one day he posted a blog post titled Upgrading to Visual Studio Scrum 3.0 process template in TFS 2013, although I had been at this point playing a lot with upgrading from TFS 2012 to TFS 2013 there was one piece of magic in that post that changed the way I applied process template changes up until today. It was a script that simple looped through the work item definitions in a set folder and imported them into TFS

This worked for a while but I still had keep a couple of PowerShell files for the different projects I want to import the process templates into. I ended up adding over the next while adding a couple of additions to the script like publishing new global lists

The first project I joined after joining the ALM Rangers was the TFS Upgrade Guide. The last part of my contributions for the upgrade guide was a PowerShell script that could help you easily upgrade your process templates (or at least publish them) after you have made the changes required to make them compatible with TFS 2013. And for some reason it wasn't until then that I made the script target multiple team projects in the same collection.

The latest small modifications that were made to the script were for the project vsarSAFe which looks at how to modify your process template to make them SAFe aware. If you aren't familiar with SAFe it stands for Scaled Agile Framework. As I'm writing this we are showing up as Delayed on the Flight Plan but will be landing soon 😁 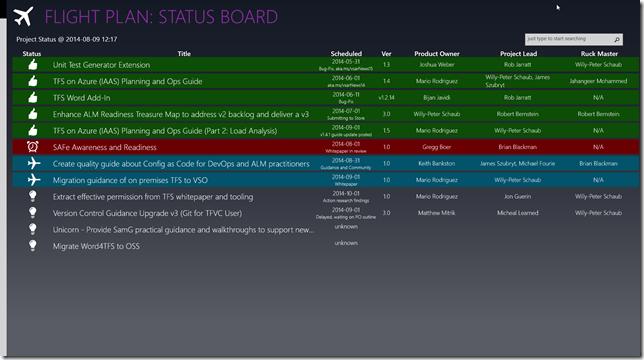 Most of the changes included here were just around adding comments and cleaning the script up a bit to make it easier to read.

The final script (as it is now) looks like below

This takes care of all the things I need when making process template changes as I now make what ever changes I need run the script and check my changes in the browser. It doesn't get much easier than this but if you have a easier way do let me know 😀.