For the last while I have been experiencing weird hangs with Visual Studio 2013. To try identify what was causing the hangs or at least where about the problem was I ran ProcMon.exe on devenv.exe and the point where Visual Studio hung I was getting the below output recursively

This was kind of weird because I'd never seen this before, I logged a Microsoft connect case through Visual Studio's Report a Bug Feature after installing the Microsoft Visual Studio 2013 Feedback Tool which allows a more detailed collection of data for your bug.

After creating this bug I attached a ETL trace using PerfView, if you don't know how to use PerfView you can follow the tutorials on Channel 9 (PerfView Tutorial).

The ETL Trace showed a large amount of time spent on the Certificates which matched what I found with ProcMon.exe 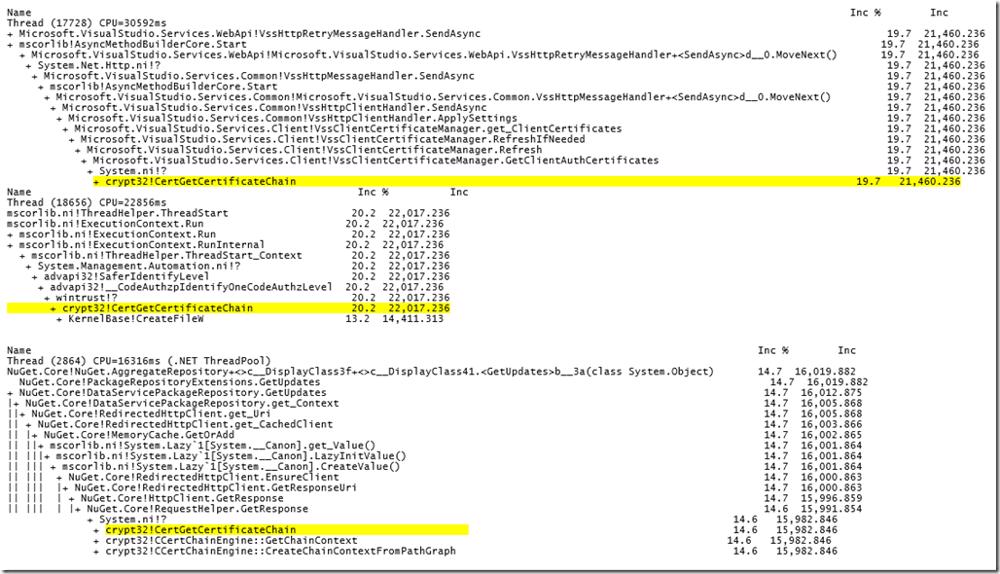 At this point it was pointed out that I should look at how many certs were in my SystemCertificates (C:\Users\<username>\AppData\Roaming\Microsoft\SystemCertificates\My\Certificates), I found that I had 2405 certs which was a lot more than usual

At this point we still didn't know what was causing so many certs to be generated. I decided to delete all the certs and see what happens. After a reboot everything was working 100% again

Later I was playing with Fiddler and saw a weird error talking about certificates, I went to the certs folder and saw that there was more there. I deleted them again, went to a https site and saw certs been generated

, the reason for so many certs is because I had Decrypt HTTPS traffic option checked

Hope this helps someone else with this random issue